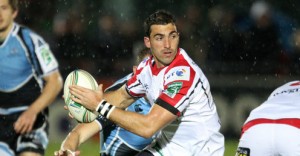 ULSTER bounced back from last week’s home defeat to Ospreys with a 26-3 bonus-points victory over bottom side Zebre.

Two tries from Robbie Diack and scores from Rob Herring and Ricky Andrew along with three Ruan Pienaar conversions helped Ulster register their 13th league win from 15 games to keep them seven points ahead of Glasgow.

In front of a packed Ravenhill crowd, Ulster were boosted by the return of five Irish squad members and looked to have got Chris Cochrane over in the corner only for the video replay to confirm a foot had got to touch.

But Zebre’s lineout ball was plundered by Herring who crossed with Pienaar extending the lead.

However, the visitors applied some pressure and deserved to narrow the deficit through Daniel Halangahu’s 33rd minute penalty.

But Ulster scored again before the break after replacement Stuart Olding was pulled up short, the ball moved left for Diack to cross.

With Pienaar missing the extras Ulster were 12-3 at the break, but they picked up the pace on the resumption and the home side had another TMO call go against them when Iain Henderson was determined to have been short of the line.

They did score again three minutes before the hour though when Diack crossed under the posts from Darren Cave’s offload after Andrew Trimble had made a great surge.

The bonus point was in their sights and it came in the 72nd minute thanks to a try from Andrew after Ulster attacked right from a scrum. Pienaar kicked the conversion.

Ulster finished with 14 men on the field after Johann Muller left the action with only four minutes left but they conceded no further points.