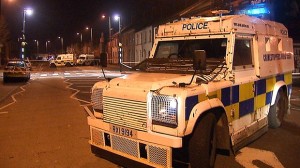 TWO men have been treated in hospital for gunshot wounds following a murder bid by dissident republicans in north Belfast.

The double shooting happened in the Oldpark Road area happened around 7.30pm on Friday evening.

It is understood two men from the Ardoyne/Oldpark were sitting in a car when they were fired on by gunmen believed to have been from the dissident terror gang Oghaigh na hEireann.

Some reports suggest that up to ten shots were fired at them.

Both men are said to be well known in the area. One is believed to be a local pub bouncer.

The men, aged 22 and 24, are said to be in a serious but stable condition in hospital.