TEENAGER FIGHTS FOR HIS LIFE AFTER DISSIDENT REBUBLICAN SHOOTING 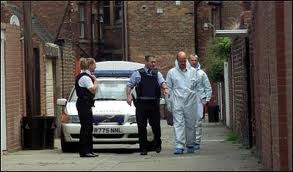 A TEENAGER is in a critical condition in hospital after he was shot in both legs by dissident republicans.

The so-called ‘kneecapping’ or paramilitary style shooting happened on Tuesday night at around 8.30pm in the Ardoyne Avenue area of north Belfast.

The alarm was raised after neighbours reported a number of shots.

The 18-year-old victim was found bleeding at the legs and paramedics trushed him to accidnet and emergency unit at the Royal Victoria Hospital, Belfast for treatment.

The Belfast Trust described his condition on Wednesday morning as “critical”.

In a follow-up investigation, PSNI detectives from the Serious Crime Branch arrested a 39-year-old man in relation to the attack.

He has been taken to the serious crime suite in Antrim where he is being questioned about the shooting.