MAN FIGHTING FOR HIS LIFE AFTER WEST BELFAST HOUSE FIRE 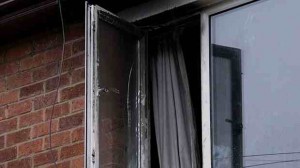 Scene of the house fire in west Belfast

A MAN is in a critical condition in hospital after a house fire in west Belfast.

Firefighters raced to the house at Brooke Drive, off Blacks Road in the early hours of Wednesday morning.

It is understood police who were first on the scene managed to lead the man and his brother to safety after the fire broke out on the first floor fire at around 2am.

However, a sister, in her 70s, was trapped upstairs before fire fighters managed to rescue her.

She was taken to hospital and is said to be in a stable condition.

Her brother, who underwent emergency surgery in the Royal Victoria Hospital, is now said to be in a critical condition.

The Fire and Rescue Service said the house was well alight on arrival.

“All occupants were taken to hospital, via ambulance,” an NIFRS statement station

An investigation is now underway to establish the cause of the fire however it is not be believed to be malicious at this stage.