A SISTER of the police officer killed in a car crash last weekend by a stolen car has told mourners at her funeral: “The baby of the family is gone, my daddy’s little girl”.

Constable Philippa Reynolds, 27, was on a routine patrol in an unmarked police car in Derry/Londonderry when it was hit by the stolen Toyota 4 x4 Land Cruiser in the early hours of Saturday morning.

Her funeral took place at Mossley Methodist Church in Newtownabbey following a private service at home of her parents, Mervyn and Dorothy.

Ms Reynolds was later laid to rest in Carnmoney Cemetery.

Her sister, Deborah, said Philippa as taken in her prime, adding that she “touched many lives during her short time on earth”.

Choking back tears, Deborah said: “She was my hero.

“I’ll never understand why God chose to take her from us at such a young age, but she will live on in our memory.

“Never in my life would I think that I had to be the one saying goodbye.”

Politicians joined the Reynolds family and friends for the funeral.

Among the mourners are the first and deputy first ministers, Peter Robinson and Martin McGuinness, as well as the justice minister, David Ford. 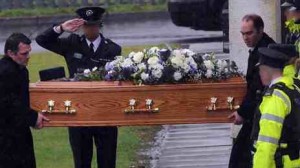 Earlier, Chief Constable Matt Baggott and Chief Superintendent Stephen Cargin described her as “one of the best”.

Speaking at a press conference, hours before the funeral, Mr Baggott said it was a day of “profound sorrow” for her family and thanked them for “giving her to us”.

He said she had been a “superb” police officer adding: “She embodied all the values that the police service is and wants to be even better at.

“She was part of the story of peace-building in Derry/Londonderry.”

The Chief Constable revealed he had been at her passing out parade two years ago.

Mr Cargin, who was Constable’s Reynold’s commander, said she typified the police officers who serve the community in Northern Ireland.

He added that “something good, something powerful” had come out of her death.

Constable Reynolds was a back seat passenger in the car which was involved in the collision. Two other officers were injured.

Two books of condolence have been opened in Derry in memory of the officer.

On Monday two men in their 20s appeared in court charged in connection to the officer’s death.