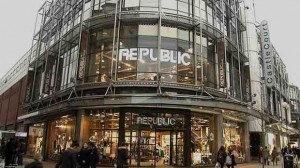 WORKERS at fashion retailer Republic are staring at the dole queue on Wednesday after it was revealed the company is about to go into administration.

It is estimated that around 25 jobs will go at the Royal Avenue store which is the only outlet in Northern Ireland.

The company has around 100 stores across the UK with more than 2,000 jobs at risk.

The clothing chain started in Leeds as a men’s denim retailer in 1986 and now sells mens and womenswear brands including G-Star, Diesel and Firetrap.

Its woes follow a bleak start to the year for the retail sector, with a series of high-profile firms having hit the wall.

It is understood that Republic has suffered amid poor trading in recent months, given the recent consumer spending pressures and its focus on the north of England – an area that has been hit particularly badly by the recession.

Chairman Andy Bond, a former Asda boss, is said to have stepped down last week after less than two years.

TPG bought Republic in June 2010 in a deal worth around £300 million, with the founders understood to have retained a significant stake.

It is understood Ernst & Young have been lined up to handle the administration process.