WE NEED A MIRACLE, SAYS LENNON AFTER CELTIC LOSE 3-0 TO JUVE 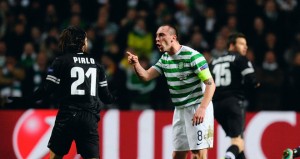 CELTIC’S UEFA Champions League adventure is hanging by a thread after Juventus secured a commanding 3-0 victory from the first leg of their last-16 clash at Parkhead.

But were undone by sloppy defending in the first and secon halfs another moment of attacking quality from the visitors.

Celtic made a nightmare start as Efe Ambrose, back in the side despite only landing back in Glasgow on the morning of the match after helping Nigeria lift the Africa Cup of Nations, failed to deal with a routine ball forward from Federico Peluso under pressure from Alessandro Matri.

The Juve forward burst into the box and poked his shot under the advancing Fraser Forster, with Kelvin Wilson’s desperate attempts to clear off the line coming too late and Claudio Marchisio hammering the loose ball into the net for good measure.

Victor Wanyama tested Gianluigi Buffon from long range twice in the opening six minutes, while Kris Commons did likewise from outside the area before volleying high over the bar from a teasing cross by Emilio Izaguirre.

There was a physical element from both teams, with Scott Brown and Andrea Pirlo clashing on several occasions, while Gary Hooper and Stephan Lichtsteiner were eventually booked in the 37th minute for continually wrestling with each other while awaiting corners.

Commons went close again when his improvised overhead kick from Mikael Lustig’s ball into the box flashed narrowly wide of the far post and Wanyama really should have done better when he met a corner unchallenged eight yards out but could only head over the bar as the interval approached.

Celtic saw penalty appeals waved away early in the second period as Lustig’s dangerous cross flew across the six-yard box, with Forrest going to ground under pressure from Andrea Barzagli but Spanish referee Alberto Mallenco waved play on.

Ambrose had a glorious opportunity to make amends for his early blunder just after the hour mark as Celtic played a corner out to Charlie Mulgrew with his precision cross picking out the defender in space on the six-yard box, but his weak header down bounced up and straight into Buffon’s hands.

Celtic continued to press, although the tempo understandably dropped from the high-octane first-half as the game progressed, but despite forcing a host of corners – one of which saw Brown and Simone Padoin booked for another spell of push-and-shove – they could not breach the backline of the Serie A leaders.

They were hit by a sucker-punch with 13 minutes remaining as Matri dinked a delightful first-time pass through to Marchisio, who cut back inside the desperately back-tracking Brown before firing beyond Forster.

And another costly blunder from Ambrose sealed the game on the night, and very probably the tie ahead of the return in Turin on March 6, as he dawdled on the ball on the edge of his own area, allowing Marchisio to steal possession before playing in Mirko Vucinic to again beat the exposed Forster.