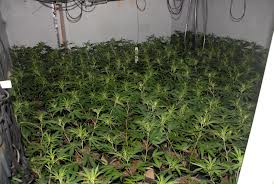 Police charge man over £70,000 worth of cannabis seized in Larne

A MAN has been charged with having cannabis with a street value of over £70,000.

The 38-year-old man has been charged with being involved in the production of the class B controlled substance, possession with intent to supply a class B drug and converting criminal property.

He is due to appear at Antrim Magistrates’ Court on Tuesday.

The charges relate to suspected cannabis plants recovered in Larne.