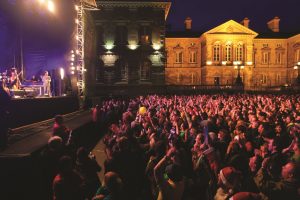 With an exciting calendar of music festivals and events including the City of Derry Jazz Festival, Glasgowbury, Belsonic and Teenage Kicks, Pauline Gormley, NITB’s Destination PR Officer says music fans will be spoilt for choice.

“The last number of years has seen Northern Ireland take centre stage with the hugely successful MTV events in Belfast not to mention Peace One Day in Derry~Londonderry,” said Pauline.

“2013 is no different and music fans can look forward to another busy year of events and festivals which includes Other Voices this weekend in Derry~Londonderry, Blues on the Bay in May, the Open House Festival in June and Glasgowbury in July to name only a few.

“What’s more, the biggest festival of Irish culture anywhere in the world, the Fleadh Cheoil na hÉireann, will be hosted in Northern Ireland in August for the first time in 60 years and is expected to attract 300,000 people from around the world,” she continued.

“We are also delighted that Radio 1’s Big Weekend will be returning to Derry~Londonderry in May for the second time as part of the 2013 UK City of Culture celebrations. And of course keep your eyes peeled for news of Belsonic 2013, returning to Belfast in August,” Pauline added.

NITB has put together a list of some of the music festivals taking place in Northern Ireland this year.

Other Voices will travel to Northern Ireland for a three day residency in Derry~Londonderry on February 8, 9 and 10, celebrating the city’s eminent status as UK City of Culture 2013. In keeping with a musical tradition nurtured in Dingle over ten years, Other Voices Derry~Londonderry will showcase the most influential voices in contemporary music with established artists and bands from across the globe performing alongside the ever burgeoning wave of emerging talent. The line-up includes Neil Hannon, Beth Orton, Two Door Cinema Club and Marina and the Diamonds.

The 9th Belfast Nashville Songwriters Festival takes place from February 20 -24 and is a celebration of the art of songwriting with more than 100 artists performing over 5 days. The city will come alive to the sound of the work and talent of singer-songwriters from all over the world. From Country to Rock, Americana to Traditional Folk, there’s something on offer for all musical tastes. Highlights of the festival include Grammy award-winning artists Brett James, Nanci Griffith and Kristian Bush of Sugarland (USA). In addition to these artists, also appearing are Belfast’s own Brian Kennedy, Gareth Dunlop, Katherine Philippa and Wes Grierson.

Primal Scream are celebrating 30 years rocking and rolling, jangling, shimmying and shaking – three decades which has cemented them as live music legends. They will take to the stage at Ebrington Arena in Derry~Londonderry on March 19. The event also features a DJ set from legendary NI DJ David Holmes.

The City of Derry Jazz and Big Band Festival takes place from May 2 to May 6 in a range of venues across the city. The five-day programme is jam packed with festival favourites along with some of the biggest stars and newest names on the jazz scene, in what will be the biggest festival to date to celebrate the city’s hosting of its inaugural UK City of Culture status.

The 15th International Guinness Blues on the Bay Festival takes place May 23 – 27 in Warrenpoint, Co Down. The full line up for this blues and jazz spectacular is still to be announced, but includes Scottish singer-songwriter and multi-instrumentalist Sandi Thom.

For the first time ever, Radio 1’s Big Weekend will be extended to three days. The extravaganza will kick off on Friday 24th May, where there will be a day focused on Dance music and BBC Radio 1Xtra plus the usual two huge days of big name acts and fresh new music on Saturday 25th and Sunday 26th May.

Music City! takes place in Derry~Londonderry on June 21 and will see the city host a huge music festival with hundreds of free musical performances across the city’s streets, squares, neighbourhoods, venues, churches, offices and workplaces. This day-long celebration of music of all genres – including Rock, Pop, Traditional, Jazz, Electronic, Classical, Opera and World Music – will be topped off by an appearance by the internationally renowned Buena Vista Social Club at The Venue (ticketed). 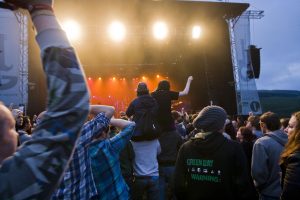 Music fans from Northern Ireland will flock to Glastonbury

Glasgowbury 2013 returns on July 19 – 20 with one of the most exciting years ever for the ‘small but massive’ festival, expanding for the first time into a two-day event.

The festival has been at the heart of new music for over 12 years offering the largest and most professional platform for emerging and established homegrown talent.

There will be a Derry~Londonderry only showcase on Friday followed by a Saturday packed full of the country’s best talent.

Comhaltas Ceoltoiri Éireann is bringing Fleadh Cheoil na hÉireann, the biggest festival of Irish culture anywhere in the world, to Derry~Londonderry in 2013.

Over the course of eight days, from August 11 to 18, the city will play host to over 300,000 visitors as traditional music takes over the streets with sessions, fun-days, pageants, marching bands, competitions, ceili bands, concerts and singing.

Drama, exhibitions and the arts are also all part of this unsurpassed celebration of Irish culture. Derry~Londonderry will be transformed into one massive performance space, and music will echo from every street and alley as the city becomes a Mecca for the cream of traditional talent.

There will be strumming on the porches of log cabins, dancing in the cobbled streets and jamming outside the General Store.

This famous festival is jam-packed with great music across a number of stages.

For further information on music events and festivals taking place in 2013 visit www.discovernorthernireland.com or call into your local tourist information centre.