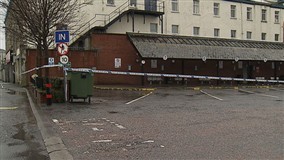 TWO teenagers have been charged following a serious assault on a 16-year-old boy at a bus station in Newtownards, Co Down.

The boy was taken to hospital for treatment after he was attacked by two people at Regent Street station on Sunday, at some time between 4.20am and 8am.

Police have charged two boys aged 17 and 18 with grievous bodily harm with intent.

They are due to appear at Newtownards Magistrates Court on Tuesday.

Meanwhile anyone who witnessed the incident has been asked to contact the PSNI.