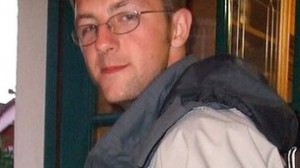 THE PSNI’S Major Investigation Team have arrested two people on Monday afternoon over the murder of a man in his Co Down home.

The body of Stephen Davidson was discovered in the livig room of the house around 5pm on Sunday by a relative.

The 31-year-old lived alone in the detached house at Ballyholme Road.

The PSNI said that MIT detectives have arrested a man and a woman over the murder of Mr Davidson.

Detectives believe Mr Davidson’s killers may have been known to him.

A 40-year-old man and 30-year-old woman were arrested in the Bangor area shortly after 1pm on Monday in connection with the murder.

The woman is being held in Belfast and the man in Bangor.

It has not been established by police if Mr Davidson let the attackers into his house, or whether drugs were involved the murder.

Police are carrying out a number of searches in the Bangor area as part of the probe.

PSNI Detective Chief Inspector Richard Campbell said said despite the arrests, the investigation was at an early stage.

He appealed for information about Mr Davidson’s movements on Saturday night through to the time he was discovered dead on Sunday. 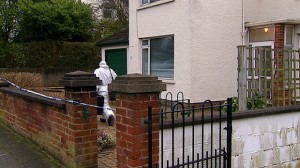 “We know that he was in the Newtownards Road area of Bangor around 9.30pm on Saturday and I am very interested and very keen to speak to anyone who may have been with him at the time, or who may have been in contact with him or saw him between then and the time he was found here on Sunday evening,” said the senior investigating officer.

DCI Campbell said he also wanted to talk to anyone who was at Mr Davidson’s address over this period.

“It appears that he has been involved in some sort of altercation in the house and as a result of that he has sustained fatal injuries,” said DCI Richard Campbell

The house has been sealed off the house while Crime Scene Investigators (CSIs) carry out a finger tip search of the property.

Local DUP MLA Alex Easton said: “We need to think about the family of this young man and pass on our condolences,” he said.

Neighbours in the quiet residential street were shocked when they heard of the news.

Simon Cummings said: “It is just total shock, that something like this would happen in Ballyholme.

Mr Cummings and his young family had only recently moved to the into the quiet residential area.

“The girls were terrified last night to see the police cars, but the police were very good, came in, spoke to the girls and reassured them that there was nothing to worry about,” he added.

A PSNI spokesman said they are probing the circumstances surrounding the death.

They have appealed for anyone who saw or heard anything unusual around the house between Saturday night and Sunday morning to contact them.