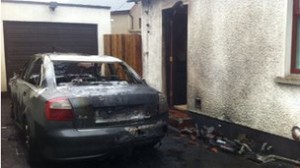 The burnt out shell of Willie Frazer’s car

DETECTIVES are investigating an arson attack outside the home of the Union flag  campaigner Willie Frazer.

A car outside his house on the Tandragee Road, Markethill, was set alight in the early hours of Sunday.

A passing police patrol saw the fire at about 1.15 am and alerted Mr Frazer.

The 52-year-old, a former director of FAIR until he stepped down last November, was taken to safety by police.

Mr Frazer was a founding member of Ulster People’s Forum, a protest group set up in the wake of the union flag protests in opposition to the Unionist Forum formed by Peter Robinson and Mike Nesbitt.

He formed the group with a number of individuals, including Jamie Bryson.

Police said the burning car was close to the house while Mr Frazer slept inside.

Officers also alerted his neighbours and drove a neighbour’s van away to ensure it did not catch alight.

The PSNI patrol called the fire service and then used hand held extinguishers and a garden hose to dampen the blaze and prevent it from spreading.

The car was completely destroyed in the fire but no-one was hurt.

Sergeant Gwyn, of Armagh PSNI, said: “This was a very dangerous fire and due to the quick thinking actions of officers out on patrol no one was hurt.

“The consequences if we had not caught this fire in time, do not bear thinking about.”

Police have launched an investigation and conducted house-to-house enquiries.

Danny Kennedy, Ulster Unionist MLA for Newry & Armagh, condemned the attack at Mr Frazer`s home and described it as a “very sinister development”.

“I am very relieved that William and his family have escaped injury and acknowledge the vigilant work and quick thinking of local PSNI officers in spotting the fire and getting everyone to safety.

“They prevented it from spreading to other properties and causing serious injury,” Mr Kennedy said.

“Whoever was responsible for the arson attack outside Willie Frazer’s home last night was not representative of the vast majority of people in this constituency,” Mr Murphy said.

“Whatever people’s views are of Mr Frazer’s public statements or actions, there can be no justification for an attack like this on a family home.”