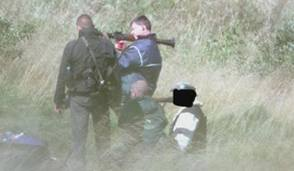 THE GARDAI have dealt a huge blow to dissident republicans waging terror in Northern Ireland after seizing rocket launchers and explosives.

Two brothers and an associate were detained on the N24 road at Cahir, in Co Tipperary on Thursday night, during the major police operation.

It is believed the swoop followed a surveillance operation targeting dissidents, and it is thought the weapons were en route to Northern Ireland.

A senior Garda officer said: “This is a significant capture.

“The intention was that they would go up north and would be passed on for further use.”

The three men, who are aged in their 30s and are from Co Limerick, are being questioned at Clonmel and Cahir garda stations on suspicion of dissident republican activity, under Section 30 of the Offences against the State Act.

The three men are also suspected of being involved in the Real IRA.

“We have full time surveillance operations going on all the time,” added a Garda. “There came a point when we moved in and this one came to fruition.”

Officers from the elite special detective unit, emergency response unit and other national and local Garda branches were involved in the operation in Tipperary.

The rocket launches, explosives and other material are now being examined by officers from the Garda Technical Unit and forensic experts.

Over the last decade, the Real IRA have been trying to boost its arsneals of death by importing rocket launchers, explosives and handguns from eastern European countries.

Three separate plots have been foiled by MI5 after the Security Service became aware of the plots.

In October 2011, Real IRA suspect Michael Campbell was jailed for 12 years in Lithunania after MI5 smashed a plot to smuggle weapons to the Republic.

His brother Liam, a chief suspect in the 1998 Omagh bomb atrocity, is wanted in Lithuania over the same plot.

However, a Belfast judge recently threw out extradition proceedings over the inhuman conditions in which he would be held in a Lithuanian prison.

That decision is currently being appealed at the Court of Appeal in Belfast.