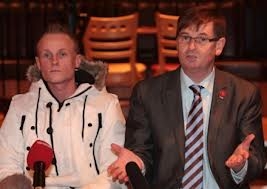 Jamie Bryson and Willie Frazer fall out over street protests

ONCE they were united by a common cause – to have the Union flag put back up on Belfast City Hall.

Now that same cause has divided them as Willie Frazer and Jamie Bryson fall out over how to continue the street protests.

As a result, Willie Frazer has had the whip removed from him as an Ulster People’s Forum spokesman by his young under study Jamie Bryson.