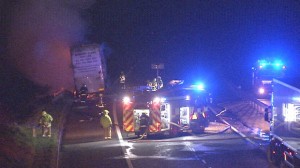 THE M1 re-opened on Thursay afternoon after a lorry caught fire on Wednesday evening.

A recovery truck has now removed the burnt out lorry and police said the motorway is now open to all traffic.

The Fire Service said the driver had a “lucky escape” as he managed to pull over to the hard shoulder before flames licked through the vehicle at the main Lurgan turn-off just after 6.30pm.

The eastbound carriageway between junctions nine and 10 wase reduced to one lane between 5.30am and 9.30am on Thursday morning.

The motorway was closed in both directions on Wednesday night as firefighters brought the blaze under control.