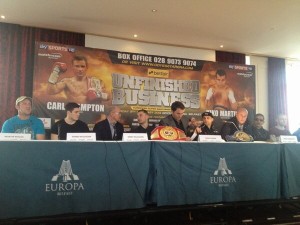 IF their press conference is anything to go by, Saturday night’s European title fight in Belfast should lift the roof off the Odyssey Arena.

There is no love lost between north Belfast’s Karl Frampton and Kiko Martinez.

And the old wounds opened again in front the cameras at the Europa Hotel two days before they enter the ring to do battle.

A war of words erupted between the boxers after Spanish fighter Martinez said he has come to Belfast to shut Frampton’s mouth.


One Response to FRAMPTON V MARTINEZ: WAR OF WORDS AHEAD OF EUROPEAN TITLE FIGHT