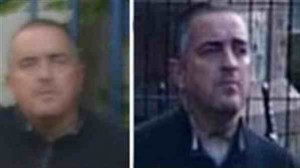 POLICE arrested a north Belfast riot suspect accused of shining a laser pen at PSNI officers after a tip off from a member of the public.

The High Court in Belfast heard on Tuesday that Stephen Boreland was arrested after a member of the public recognised him among photographs published of suspected offenders.

The 50-year-old, of Lord Street Mews, Belfast, was spotted at the front of crowds who attacked PSNI lines during a 12-hour onslaught last September, prosecutors said.

Boreland faces charges of rioting and possession of an offensive weapon in a public place.

He was detained in December after images taken from CCTV footage of people police wished to question in connection with the disorder appeared in the press.

Prosecution lawyer Conor Maguire told a bail hearing: “That same day they were published police were contacted by a member of the public in response to the media appeal and the applicant was identified as one of the persons depicted.

“During interviews Boreland was shown photographs which allegedly put him at the front of the disorder, targeting police lines with a laser pen.”

“He was an active and prolonged participant in the rioting that occurred on September 2,” Mr Maguire claimed.

“At one point he changed his clothing and disguised himself using hats.”

Boreland was said to have admitted being the person in the footage and to have used the laser pen to distract police, but gave no reason for his actions.

Defence counsel Ryan McAllister said his client accepted the case against him but claimed he only went to the rioting on his way home after “curiosity got the better of him”.

The barrister added: “He did have this laser in his pocket which he had bought on the internet sometime prior.”

Boreland was seeking release from custody after undergoing surgery last month for a broken wrist.

His injury is causing serious difficulties in washing and dressing which could be better coped with at home, said Mr McAllister.

Bail was refused, however, due to the risk of any further offending.

“Perhaps the (wrist) injury may have brought home to the applicant the consequences of what is totally unacceptable behaviour on the public streets.”