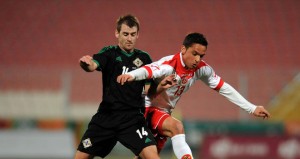 On Wednesday evening, his team came away from their friendly against Malta with a scoreless draw.

That means Northern Ireland haven’t won in the eight matches under his stewardship.

And it means that the team haven’t won a game in their last 12 outings on the international scene.

Which can’t bode well for the remainder of the qualifiers ahead of the World Cup in Brazil in 2014.

And the manager admitted after the game that he was disappointed not come away with more than a just a point.

There weren’t many chances in a pretty low key friendly game.

It was the hosts who made the brighter start and Northern Ireland were almost behind in the fifth minute when Andrew Cohen crossed for Andre Schembri, who should have scored but shot straight at Alan Mannus from eight yards.

Moments later Northern Ireland had the ball in the net when Gareth McAuley headed in a Chris Brunt corner but Bulgarian referee Nikolay Yordanov disallowed it for pushing.

Mifsud was proving a handful for the visiting defence and his trickery created another opening for Schembri, whose drive beat Mannus but flew just past the angle of post and bar.

Malta were looking the more likely to break the deadlock and Clayton Failla was the next to threaten Mannus’ goal with a fierce free-kick from 30 yards that was a yard over the bar.

Wingers McGinn and Shane Ferguson were having little joy down the flanks but in the 36th minute McGinn made progress down the right and Steven Davis crossed for Will Grigg to glance a header wide.

The visitors almost caught Malta cold as McGinn broke through in the middle but Andrew Hogg was off his line quickly to punch clear, while Aaron Hughes then did well to get to the byline on the right and pull the ball back but McGinn scuffed his shot.

In the 56th minute Mannus was called into serious action for the first time when Mifsud unleashed a stinging shot from the right, the keeper palming it away.

The visitors were pressing but in the 70th minute they were indebted to Mannus for an excellent stop to keep out Mifsud once again.

Pat McCourt and Josh Magennis were introduced late on but there was no way through the Malta defence and the visitors had to settle for a disappointing draw.

“While we controlled lots of the game, we did not create that many chances. The conditions and pitch were difficult and they were well organised.”

Northern Ireland now have home World Cup qualifiers against Russia and Israel in March and manager O’Neill believes the frustrating night in Valletta will have no bearing on those testing fixtures.

“We look forward to the qualifying games, I think they have a different edge to them,” he added.

“There were not as many positives as I would have liked but some young players got game time tonight.

“Look at William Grigg, Daniel Lafferty got just his third cap and Billy McKay made his debut. Alan Mannus got a full game and kept a clean sheet.

“But, overall we know where we need to improve.

“For the players, games like tonight are difficult. There were not many people at the game and it had a reserve team feel about it.

“It has been a useful three days but we are disappointed not to win the game.”