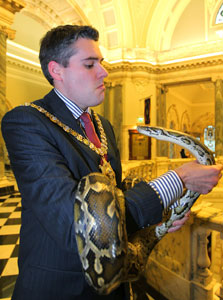 Lord Mayor Gavin Robinson welcomes in the ‘Year of the Snake’

“SOME of you passing the City Hall may have noticed the beautiful red lanterns which are currently hanging in the grounds.

“They have been put up as part of the celebrations to welcome the Chinese New Year.

“This year’s celebrations, which begin this coming weekend, will welcome the Year Of The Snake and will be the biggest ever staged here in Northern Ireland.

“There are a full 15 days of events, not only here in Belfast but also in Carrickfergus, Craigavon, Londonderry and Newry.

“The Chinese community in Northern Ireland is one of our biggest and longest established minority communities.

“Having arrived in Belfast in the 1960s, the Chinese community has played a vital role in contributing to both the economic and social regeneration of the city.

” The strong work ethic and diversity of talent within the Chinese community have added to Belfast’s creativity and exposed the city to opportunities and markets in other parts of the world.

“At a civic level, we have engaged with China since the late 1990s, when we established a sister-city relationship with Hefei in the Province of Anhui.

“This relationship was formed as part of our international networking aimed at developing business and civic relationships with this Chinese city.

“More recently, through the Investment Programme that we launched in February 2012, we have committed to develop an international strategy, within which China relations will be a key target.

“Together with other partners in the city, we aim to support and build the relationships that we have with key locations of strategic importance throughout the world.

“I wish our many friends in the Chinese community – and all the people of Belfast – Gong Xei Fa Choi.”