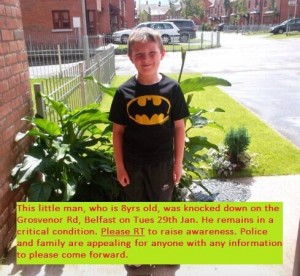 Family appeal for help after Joe McDermott was knocked down

THE family of a young school boy have appealed for help after he was left critically injured in hospital.

Joe McDermott is fighting for is life in the Royal Victoria Hospital in Belfast after he was knocked down by a car on the Grovesnor Road last week.

He was on his hit by a Honda 4 x 4 car after returning from a shop around 3pm.

The eight-year-old has been left with horrendous injuries including fractures to his jaw, neck, pelvis, ribs, arms and legs.

His family are keeping a bedside vigil for him the Royal Hospital for Sick Children.

Mum Joanne said she was “going through hell” watching her son fighting for is life in hospital.

“My main thing at the minute is his neck. He’s heavily sedated.

“At the minute it is just a waiting game.

“I have a lot of support and I have a very close family and they are really helping me at the minute.

Joe’s mum has appealed for anyone with information about the accident to come forward.

“Anyone who has any information, no matter how small to get in touch with police at Grovesnor Road station,” added Ms McDermott.

Only days before the accident, the young school boy was celebrating after his team Cliftonville won the IRN-BRU League Cup final against Crusaders thumping them north Belfast 4-0.

Grandfather Sean Smith described the accident scene “as a sight I will never forget”.

“It’s been devastating. We feel so powerless. They say it is one day at a time.

“He needs as many prayers as possible. They thought that everybody is praying for him is helping Joanne. It has lifted her big time.

“I believe in the power of prayer. He is fighting with every fibre in his body. The doctors even said he was a wee fighter,” added Mr Smith.