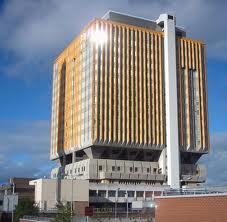 The unit at the City temporarily shut its doors in November 2011 because of a shortage of doctors.

However, it may never re-open under proposals considered by Health Minister Edwin Poots.

The A&E units at the Royal Victoria and the Mater hospitals would remain open.

A 13 week consultation on the changes to emergency services in Belfast has been launched, which Mr Poots said is focused on the safety of patient care.

The Minister said the Trust and Health and Social Care Board assured him that the closure of the City ED would still provide a service that is “safe and sustainable and will deliver high quality care”.

Said Minister Poots: “Following public consultation, if I decide to adopt the preferred option, this change will result in the permanent closure of the Emergency Department in Belfast City Hospital.”

The Minister said the possible closure has been compounded due to a lack of middle grade doctors. He added that concerns remain over the level of supervision of doctors, especially junior medical staff on night shifts, but the Minister denied the measures are a result of cash shortages.

“These proposals relate to securing the safety and quality of care; they are not about efficiencies or cuts because the key issue here is the need to ensure that there is an emergency service for Belfast and the nearby areas that works and meets the needs of the population,” he told the Assembly in a written statement.

“The proposals in the consultation document aim to move forward the implementation of the above policies, ensuring that patients in Belfast will continue to have access in the future to high quality services and care when they need urgent or emergency treatment.”

The Minister said he was encouraged by how effective the temporary closure of the City A&E in November 2011, had been.

“From the evidence of how the temporary change has been delivered by the trust over the past 15 months I believe looking forward that we can have confidence that the model of care proposed in the preferred option is both safe and sustainable,” he said.

The Royal currently serves as Northern Ireland’s regional trauma centre and has provisions for intensive care, cardiac surgery, and neurosurgery, as well as specialising in the treatment of stroke patients.