SO FAREWELL ‘MALKY’, TAKEN TO THE GREAT FOOTBALLING GODS IN THE SKY

HUNDREDS from the world of football and sport journalism gathered at Monday lunchtime for the funeral of Malcolm Brodie.

‘Malky’, or ‘MB’, as he was known among friends and colleagues, died last week at the age of 86.

He was best known for his extensive World Cup coverage.

Dame Mary Peters, a life long friend, gave the eulogy to the journalist who was described as a legend of his time.

The funeral service was followed by a private committal at Roselawn Crematorium.

‘MB’ reported on 14 World Cup finals since he began covering the global sporting event in 1954 – more than any other journalist – and was awarded the Jules Rimet Trophy by FIFA for his efforts.

He was the president of the Northern Ireland Football Writers Association (NIFWA), and members of the association helped carry his coffin.

The Northern Ireland team are currently in Malta ahead of their friendly on Tuesday evening. 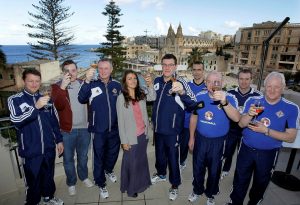 As they couldn’t be at the funeral, the team and NIFRW chairman Mark McIntosh raised a glass to Brodie in the capital Valetta.

Originally from Scotland, Dr Malcolm Brodie was evacuated during the Second World War from Glasgow to Portadown, Co Armagh, where he began his career in journalism.

He joined the Belfast Telegraph in 1943 when he saw a vacancy for a copy taker advertised and later, set up the paper’s first sports desk before becoming Sports Editor.

His services to journalism were recognised down through the years with numerous awards, including an MBE.

“I have known him nearly 40 years . I knew him when I first came into management.

“He was a great friend and I always valued his opinion.

“He cut to the chase. He was very straight talking.

“And the amazing thing was he never changed his accent and that was very difficult living in a place like Belfast.”

And Sir Alex said with both being Scottish they could understand each other in their native tongue.

“It is a code. The language is a code to each other,” added Sir Alex.

He said: “We will never see his like again. The word unique doesn’t do his personality or longevity justice.”