EXCLUSIVE: A DISSIDENT republican terror gang has hatched a deadly plan to kill police officers and and to try to lure loyalist paramilitaries back to war.

Belfast Daily understands that a pipe bomb left in Greencastle, north Belfast on Tuesday was an attempt by Oglaigh na hEireann (ONH) to increase tensions and force loyalist paramilitaries to respond.

The crude home-made viable device was found near a cross-community centre which children had been using only hours early.

The attack was widely condemned by politicians in north Belfast.

And on Wednesday night, a viable pipe bomb was thrown at police at the junction of Rosapenna Street and Oldpark Road.

Both devices were made safe following examinations by Army technical officers.

About 20 houses in the area were evacuated and the road was closed overnight while the Army examined the device.

Said Chief Supt Clarke: “Shortly after ten o’clock last night a police patrol was in the area of the Oldpark Road/Rosapenna Street junction when they believed something was thrown at their vehicle.

“They weren’t aware what that was at that time. Unfortunately, what can happen in this area is that stones and bricks will be thrown at police vehicles.”

The district commander said that about 15 minutes later, a phone call was made to the Samaritans, warning that a pipe bomb had been thrown in the area.

The police then began to evacuate homes in the street and a search for the device got under way.

It was discovered during the night and was been taken away by Army bomb disposal officers for further examination.

Chief Supt Clarke said the attack was “clearly an attempt to kill police” but he added that it was also “reckless as to the consequences to the safety of other people”.

He said it was a busy, residential street and there were a number of young people in the area at the time, who could have been injured.

“Not only was there a risk posed to those people but there was massive inconvenience posed to people of all ages and to families in an around that area,” the district commander added.

“We had to evacuate a little under 20 houses last night. That’s people who are out of their homes in the middle of the night – children who maybe won’t get to school this morning, old people who will be facing the challenge of not being able to have a night in their own bed.” 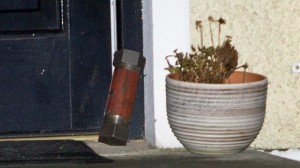 “They will get some innocent teenager or a taxi driver killed because of their lust for the other side to take the bait and retaliate,” said the dissident republican source.

“What they are looking for is retaliation, to goad loyalists into hitting back.

“They have made quite a few of these pipe bombs and are ready to be used.

“The police are another target in the area, especially vehicles which have no armour plating.

“People need to be extremely careful at the moment because these guys are dangerous and are hellbent on killing someone.”

The source said two mystery “explosions” in the Woodvale area close to the Crumlin Road were also the work of ONH.

Despite extensive searches, no devices have been found but the source said ONH were responsible.

“They are starting to ratchet things up in that area.

“The plan is to whip up such fear and terror among the public in that area that they will then put pressure on loyalist paramilitaries to protect them and respond.

“That is why it is such a dangerous game. Innocent people’s lives are at stake but they don’t care as long as loyalists take the bait.”