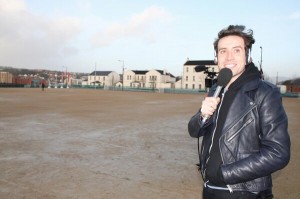 And getting the gig has been described as an “amazing coup” for the city.

City of Culture organiser Martin Bradley said on Thursday: “We couldn’t have asked for anything better”.

The event was last held in Derry/Londonderry in 2004, attracting a crowd of over 10,000 people.

It is expected that this year’s event in May will attract around 40,000 people across three days.

“With this kind of event in the city, the media coverage and profile of the city is going to be phenomenal now for the next few months,” said Mr Bradley.

“The line-up is absolutely amazing, we are going to have international stars here in the city and you just couldn’t put a price on that.”

Olly Murs and Northern Irish band Two Door Cinema club are the first artists to be confirmed. A full-line up will be revealed in the coming months.

Jason Carter, the BBC’s head of live music and events, popular music said that while he could not reveal names “I can tell you we will be having huge UK artists and huge US artists in the line-up”.

“It really is very exciting,” he said.

“The youth in the city were waiting for this for months and now it is on their doorstep,” he said.

Before the festival young people in Derry will be invited to attend Radio 1 and 1Xtra’s academy between 13 and 17 May to take part in a series of workshops and sessions.

Martin Bradley said that will be a “big benefit”.

“You’re going to have the stars – like Rhianna did last year when the event was in Hackney – going round the schools working with young people and that fits in perfectly with the whole City of Culture programme and the music promise of getting young people involved,” he added.

The profile of the event has increased significantly since 2004 and is now televised.

Mr Carter said there was high demand for tickets as a result and “a supply and demand problem always exists”.

“It will be a hot ticket, a golden ticket if you get one,” he said, but added that “we will make sure there is a priority to the young people of the area”.