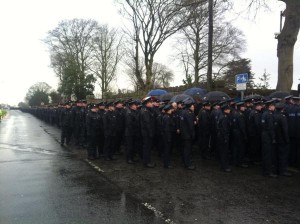 THE state funeral is taking place on Wednesday for the Garda detective blasted to death with a shotgun during a robbery last week in Co Louth.

Up to 1,500 Garda colleagues are attending to pay their respects to Detective Garda Adrian Donohoe.

The 41 year-old father of two was killed at Lordship Credit Union in Bellurgan at last Friday night.

His funeral is taking place at St Joseph’s Redemptorist Church in Dundalk.

Fr Michael Cusack has told mourners that those who killed Det Gard Donohoe “should be turned in”.

The Irish League of Credit Unions has offered a reward of 50,000 euros (£42,791) for information which might lead to arrests or prosecutions.

It was revealed that Detective Donohoe was have been on RTE’s Crimecall programme on Tuesday evening.

Instead, he became the main subject of the programme as the hunt continued to catch his killers.

Superintendent David Taylor told RTE that the murder was carried out in a “most malicious and callous manner”.

But he said there had been “huge support” from across Ireland.

“The PSNI’s support and solidarity is of immense help to us,” he added.

Last Saturday, PSNI deputy chief constable Judith Gillespie, stopped off in Dundalk on her way back from an engagement in Dublin, to express her sympathy with colleagues of Detective Garda Donohoe.

Det Garda Donohoe was one of two detectives on escort duty when the robbery happened.

It is believed that the raiders knew the credit union money was being escorted by police.

Detectives said the gunman did not hesitate before shooting the 41-year-old garda in the head.

His colleague, Det Garda Joe Ryan, was held at gunpoint while the gang stole 4,000 euros (£3,424) before making off. He remains deeply traumatised.

It has also emerged that Garda Donohoe had not been due to be on duty last Friday night, but was filling in for a colleague.

They believe that a burnt-out car – stolen a few days before the killing in the fishing village of Clogherhead in Louth, and found near Keady, County Armagh, on Sunday was used by the killers.

It was found in Fews Forest, about 25 miles away from the shooting in County Louth.

The PSNI are carrying out a forensic investigation of the car.

PSNI detectives have also visited the homes of a number of crime gang suspects in Newry and Warrenpoint.

In the RTE Crimecall programme, Supt Taylor said police particularly wanted to know about the whereabouts of the blue car between Tuesday night and Friday. They also want to know if anyone saw it being burned out.

While Irish police have not ruled anything out at this stage, they suspect that a cross-border gang was involved in the robbery and murder, and that gang operates in the north Louth-south Armagh area.

They believe they are close to identifying five members of the gang involved.

More than 100 gardaí are involved in the investigation into the murder, with officers cancelling leave and coming in on their days off.