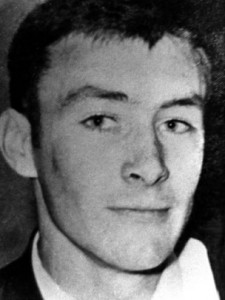 Joe McCann shot dead by Army in 1972 in disputed circumstances

THE Historical Enquiries team has found that the Army was not justified in shooting dead an Official IRA man in Belfast during the Troubles.

Joe McCann was shot by soldiers in disputed circumstances in Joy Street in the Markets area of south Belfast close to his home on April 15, 1972.

The Historical Enquiries Team has carried out an investigation into his death.

This has included a review of police files from the time, including intelligence material held on the shooting incident.

The HET report said on Tuesday: “Joe’s actions did not amount to the level of specific threat which could have justified the soldiers opening fire in accordance with the Army rules of engagement.”

Mr McCann’s daughter, Nuala McCann, said: “The shooting of our father was not justified. It was unjustified.”

Joe McCann was unarmed when he was shot by members of the Parachute Regiment.

At the inquest into his death, soldiers said they had expected him to be carrying a weapon.

He was unarmed when shot. It is also thought that he had disguised his appearance.

The HET is currently carrying out a review of Troubles-related murders from 1968-1998.

The team aims to bring closure to many bereaved families who still have unanswered questions about the death or disappearance of their loved ones.