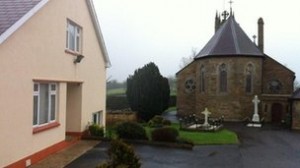 POLICE on both sides of the border are liasing over two robberies at separate church properties.

Garda detectives are investigating after three men entered the priest’s house in Belturbet, Co Cavan around 6.45pm on Monday and stole a sum of money.

The two people, who were in the Belturbet parochial house at the time, were also uninjured.

The PSNI were alerted just over an hour later at 8pm when three men entered an office at St Naile’s parish hall on Main Street, Kinawley, Co Fermanagh and demanded money from two women.

The robbers made off with a sum of money and a cash box.

The two women, who were counting church envelopes at the time, were not injured but were left badly shaken.

PSNI and Gardai are investigating to see if the same gang was involved in the incidents.

In both robberies, one of the gang carried a hammer.

A knife was also carried by one of the gang in the County Cavan theft.

Police said the men were all wearing hooded tops and it is believed they made off in a dark coloured saloon car.

Gangs have been using the border to travel in and out to carry out robberies.

There have been a number of robbery incidents in recent weeks in Donegal on the homes of pensioners.