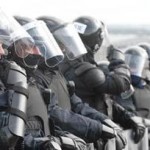 A MAN is to face a court on Monday charged following a protest in Newtownabbey, Co Antrim.

The 31-year-old was detained on Saturday night and has since been charged with resisting police, riot, assault on police and possession of a class B drug.

He is due to appear at Belfast Magistrates’ Court on Monday.

Police said they dealt with disorder in the area on Sunday night.

A PSNI spokesperson said the O’Neill Road and Station Road were closed to traffic for a time but later re-opened.