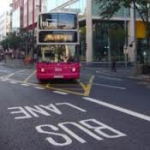 Roadworks start on Monday for new bus lanes in Belfast

A NEW phased of roadworks starts in Belfast city centre on Monday and motorists have been warned to expect possible delays.

The roadworks are part of the ‘Belfast On The Move’ scheme and the latest phase is expected to take up to 12 weeks to complete.

The work begins on Grosvenor Road and College Avenue at 7 pm Monday, with overnight works on both streets.

It is to facilitate new bus lanes on Great Victoria Street and College Sq East – one of Belfast’s busiest routes.

Said Transport Minister Danny Kennedy:”It is expected that, like phase one, there will be a ‘bedding in’ period for the new works.”

During the road works scheme,  there is expected to be some daytime lane restrictions in place.

However, the Department of Regional Development (DRD) has said that most of the work will be carried out during off-peak hours in order to minimise traffic disruption.

Access to the streets will be maintained throughout the scheme but the department has suggested that motorists use other routes where possible.

“Those who normally travel along Great Victoria Street should consider using the alternative route via Hope Street, Sandy Row, Durham Street and College Square North to avoid the works,” the DRD said.

The Belfast on the Move project aims to reduce the number of cars in the city, giving priority to buses, cyclists and pedestrians. 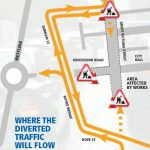 A map of where Belfast roadworks will take place

When new bus lanes opened in May Street in September, under the first phase of Belfast on the Move, motorists and city centre retailers complained of severe traffic jams during the rush hour.

Two weeks later, the president of Belfast Chamber of Trade and Commerce said the bus lanes had brought “chaos to the morning commute”.

Joe Jordan said business owners had experienced a “noticeable downturn in footfall” in the city centre and were linking it to the traffic disruption.

Amid the controversy, a multi-agency group was set up to tackle the congestion and address the concerns it had raised.

On 3 October, officials from the DRD, Roads Service, the police, Translink, city centre traders and Belfast City Council agreed to meet on a fortnightly basis for two months.

The DRD minister introduced a package of measures to encourage people back into the city centre and even ordered an embargo on road works on main routes across the city from 26 November until after Christmas.

On 3 December, however, a campaign of street protests began following Belfast City Council’s decision to change its long-standing union flag policy at the city hall.

Some of the demonstrations resulted road blocks, damage to cars through to attacks on police and serious rioting.

City centre businesses, who had already endured weeks of traffic disruption, said the ongoing protests had created a “crisis” that would cost jobs.

The Minister hopes that the latest phase of roadworks does not put off shoppers coming into the city centre.

Said Danny Kennedy said: “We will, of course, do all that we can to minimise disruption – work is scheduled to be carried out at off peak times to avoid undue delay to commuter traffic; and resurfacing will be carried out at weekends and overnight where possible.”

His department said that following the completion of the first phase of the road works in October, daily traffic flows in the city centre have reduced.

Most of the period under review coincided with the flag protests, but the DRD also said that Metro bus passenger numbers had increased by an average of 1,500 a day and use of the city’s Park and Ride services had risen by 15%.

Translink confirmed that it calculated the bus figure by examining its Metro passenger numbers from the end of the road works in October through to early January, and then compared it to the same period in 2011-2012.

Work to create the new bus lanes will begin at on Monday and will continue at off peak hours for about three weeks.

DRD said its staff would be “working through the night” from 19:00 GMT to 06:00 GMT to prevent traffic disruption.

It said: “Access to the city centre, including car parks, shops and other premises, will be maintained at all times.”

As part of the programme, cycle paths with be created on Ann St and Victoria St.

The second phase of Belfast on the Move is due to be complete by mid-June 2013.