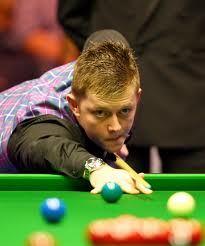 MARK Allen knows he had the chances to win the Betfair 2013 shoot out in Blackpool at the weekend.

The Co Antrim cueman went into the final as the yellow jersey favourited to lift the crown and a cheque for £32,000.

But a tricky red early in the frame let in Martin Gould who raced to a 46-0 lead.

To make matters worse, Allen missed another long red and Gould stepped in to win the frame and the title 104-0

Said Allen: “I had a couple of chances but I didn’t take them. Martin took his and that’s what happens in shootout.

“Good luck to him. He deserved it once he got in among the balls he showed how good a frame breaker he is.”

It’s his second title in a televised event as he won Power Snooker in 2011.

A magnificent pot on a black ball shoot out from Allen secured the victory after they were all square on 53-53.