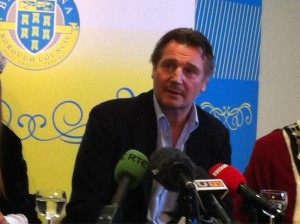 Liam Neeson at a press conference in Ballymena

LIAM Neeson has received the Freedom of the Borough from Ballymena Borough Council at a ceremony in the town on Monday.

The Hollywood actor was greeted at the Braid Centre by Mayor P J McAvoy.

The Oscar-nominated actor is best known for starring roles in the Star Wars film The Phantom Menace, Schindler’s List, Taken and Michael Collins.

The Freedom of the Borough is the highest accolade the council can award a citizen.

He exchanged a few words with the crowd waiting to greet him and posed for photographs.

Among those attending was former first minister and DUP leader Ian Paisley, who was previously awarded the honour, and his son Ian jnr who is the MP for North Antrim.

Hundreds of people also cheered the star from the streets outside. 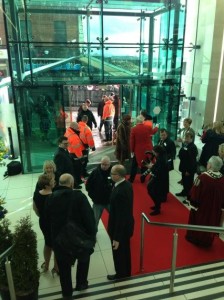 At the ceremony, Mayor P J McAvoy, formally proposed the honour which was seconded by councillor Tommy Nicholl before being given the approval of the members of the council.

Mr Neeson was then invited to sign the Book of Burgesses.

Asked what it meant growing up in Ballymena, he said: “Eating pototoes and a good work ethic.”

Speaking ahead of the ceremony, councillor McAvoy said: “This is a significant civic occasion but we have been at pains to keep the formalities to a minimum, in keeping with Liam’s relaxed style and recognising that this is, above all, a gathering of friends.

“It will also be a real Ballymena-style celebration, with some of our fantastic local talent providing the music; Ballymena students providing their own cinematic tribute to Liam’s life and work and local produce providing guests with a literal ‘taste of the region’.

“Liam will find himself very much at home when he steps onto the stage to speak to his Ballymena audience, for he started his acting career by treading those very boards as a young member of the Slemish Players.”

Councillor McAvoy said that in the past Freemen of the Borough “earned tax benefits and could drive their sheep unimpeded through the town”.

“I’m afraid Liam won’t reap those rewards on Monday, but he will certainly gain an insight into the esteem in which he is held in Ballymena,” he added.

“We look forward to honouring an outstanding individual who has proved to be both an exceptional talent and a superb global ambassador for Ballymena.”

Liam Neeson has starred in dozens of films including Five Minutes of Heaven with James Nesbitt.

Ahead of the ceremony, Liam Neeson said he was honoured and delighted to accept the award from Ballymena Borough Council.

Mr Neeson said: “Enormous strides have been made in my native Northern Ireland in the past decade, demonstrated by political, social and economic changes that came about through a combination of courage, generosity and persistence.”

It is not the first time Ballymena council has planned to grant the actor the honour.

In 2000, Democratic Unionist Party councillors objected to the proposal because of alleged derogatory remarks Mr Neeson made about his experiences growing up in the County Antrim town.

At the time, Mr Neeson was quoted as saying in an American magazine that he felt “second class” as a Catholic growing up in the mainly Protestant town and felt he had to stay indoors during the loyalist 12 July commemoration of the Battle of the Boyne.

Following the controversy, Mr Neeson wrote a letter to the council.

It said: “I will always remain very proud of my upbringing in, and association with, the town and my country of birth, which I will continue to promote at every opportunity.

“Indeed I regard the enduring support over the years from all sections of the community in Ballymena as being more than sufficient recognition for any success which I may have achieved as an actor.”