THE GANG which shot one Garda dead and held another hostage are believed to be a cross-Border criminal gang.

PSNI detectives believe members of the gang are from the Newry and Warrenpoint areas of south Down.

Withn an hour of the shooting, PSNI officers visited the homes of a number of the criminals but none were at home, heightening suspicion those they were looking for were involved in the shooting.

A car used in the murder of Gda Detective Adrian Donohoe on Friday night has been found burnt out in south Armagh.

The PSNI are helping Gardaí in their hunt for the gang which attacked the officers at a credit union office near Dundalk, Co Louth, at 9.30pm on Friday.

A technical examination on a burnt out Volkswagen Passat is being carried out but it has not been determined if it is connected to the officer’s murder at this stage.

The vehicle was found in Fews Forest near Keady in Co Armagh on Sunday afternoon, about 25 miles away from the shooting in Co Louth.

Speaking in the assembly on Monday, Mr Givan was responding to an urgent question asked by the SDLP’s Conall McDevitt. 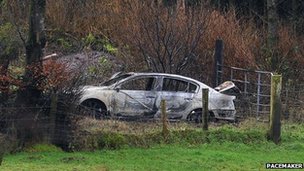 Mr McDevitt had questioned how criminal justice agencies in the Irish Republic and in Northern Ireland were working together in their response to the murder of Mr Donohoe.

“We need assurances that Northern Ireland is not seen as a safe place for these individuals to be residing and that every effort is made to try and track them down,” Mr Givan said.

Stormont Justice Minister David Ford restated that he and the Republic of Ireland’s Minister for Justice, Alan Shatter, had reinforced their commitment to work together against criminal gangs.

“There is no doubt that there is a lot going on, on a cross border basis and it is absolutely clear that that requires the support of each and every one of us.”

“We have in excess of over one hundred Gardaí involved, included specialist national and regional units,” a spokesperson said.

“We are liaising closely with our colleagues in the PSNI and acknowledge their support and assistance.

“An Garda Síochána would like to acknowledge the huge amount of public support we have received since the tragic event,” they added.

“This support means a great deal to the family, friends and colleagues of Detective Garda Adrian Donohoe and is a source of great comfort at this difficult time.”

The same gang is suspected of having stolen €62,000 from the same credit union a year and a half ago, also using shotguns and on a Friday before the garda escort arrived.

More than 100 Gardaí are now involved in the investigation, with officers cancelling leave and coming in on their days off.