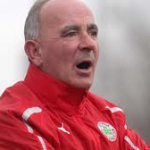 CLIFTONVILLE hammered Crusaders 4-0 to lift the League Cup in a rain-soaked final at Windsor Park on Saturday evening.

It was the first time the Solitude men had won the title since 2004.

The win means Cliftonville have secured their piece of silverware of the 2012/2013 season.

And a treble is still on the cards for the north Belfast side.

The Reds are still in the Irish Cup and are runaway leaders in the Danske Bank Irish Premier League.

Goals midway through the first half by Diarmiud O’Carroll and Joe Gormley put Tommy Breslin’s men in command.

Crusaders then had winger Paul Heatley sent-off for a rash tackle from behind on George McMullan in the 50th minute.

Gormley ran through to clip a sweet finish over Crues keeper Yohann Lacroix for 3-0 and Ryan Catney wrapped up the big with with a fine shot.

It was Catney’s first goal since March and put the icing on a memorable night at Windsor Park for Tommy Breslin’s runaway.

Gormley should really have made it five but, seconds after being named man of the match, he missed a stoppage-time tap-in for his hat-trick.

In the end, it was not as competitive as expected but Cliftonville despatched their title rivals with ruthless efficiency.

Such a landslide win did not look likely on the evidence of the opening exchanges.

After Johnston had fired a shot wide for Cliftonville, Crusaders had more of the early chances with Jordan Owens being denied by keeper Conor Devlin and Heatley firing a low shot just wide.

Timmy Adamson then had a long-range effort turned away by Devlin who also did well to block a Colin Coates header on the line.

Cliftonville then began to show why they are runaway leaders in the Irish Premiership.

But there was little he could do to prevent the Cliftonville opener as O’Carroll’s shot was deflected in off Crues defender Craig McClean after Liam Boyce’s pass had set the chance up.

Tommy Breslin’s side doubled their lead when Johnston got in on the right and pulled the ball back into the danger area where Gormley bundled it in, with defender McKeown also getting a slight touch.

Crusaders, after their bright opening, looked stunned by that quickfire double blow and it could have been worse but for a fine save by Lacroiz from Garett just before the interval.

The Crues, who beat Coleraine in last season’s final, needed a good start to the second half – instead they had one of their best attacking players sent-off.

Pacey winger Heatley deserved the red card as he rashly clattered into McMullan from behind. Heatley briefly lost his head, Crusaders lost a key player for the rest of the match.

Crusaders, with striker David Rainey on as a substitute, kept battling and had some half chances.

But their faint hopes were snuffed out when Gormley made it 3-0.

If there was some doubt over whether Cliftonville’s second was Gormley’s or an own goal, there was no question about the 72nd-minute third.

Gormley ran on to Garrett’s perfectly-timed pass and chipped a cool finish over keeper Lacroix for his 21st goal of the season.

Two minutes later it was 4-0 as Coates failed to cut out the through ball and Catney went on to fire an accurate finish in off the far post.

Just to underline the fact that this was not to be the Shore Road side’s night, Jordan Owens stretched for a header but it struck the far post.