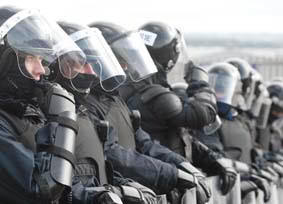 TROUBLE has erupted in east Belfast between loyalists and the PSNI after marchers claimed police officers beat a man unconscious.

To Watch the video cick on link: http://youtu.be/VXtws1Xezgc

The incident happened after the Union flag parade made its way back from Belfast City Hall to east Belfast.

Sources claimed a pensioner was “viciously assaulted” by PSNI officers in riot gear.

The man is seen on footage lying prostrate on the ground as riot cops tried to put his legs in ankle restraints.

While the restraints are being put on, another officer is sitting on top of his body.

Then a police officer is heard saying: “Get him onto his feet.”

However, as they try to get the elderly man to his feet, he is a dead weight in the arms of police officers.

Meanwhile, an angry crowd gather round, furious that the man appears to be unconscious, has been given on first aid, and police officers trying to put ankle restraints on him.

Voices in the crowd shout out: “IRA/PSNI bastards”

Loyalists also claim that three youg people have also been injured by police.

The assaults have spread like wildfire across social media sites, with calls for the UDA and UVF to “break their ceasefires and engage the PSNI”.