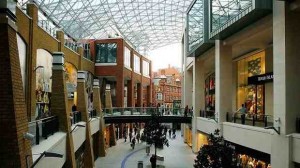 BELFAST’S premier store has suffered a blow with the announcement that three stores are closing at the end of the month.

GEOX shoe store and two eateries, the Gourmet Burger Kitchen, and Yogen Fruz will shut their doors on January 31 at Victora Sqaure.

In March 2008 GEOX opened, followed by the Gourmet Burger Kitchen in May of the same year. Yogen Fruz joined the centre in December 2010.

Hugh Black, centre manager, Victoria Square said that while the closures were regrettable, other retailers had opened in the centre in the last three months and more are coming.

“Whilst we regret the closure of any store or restaurant and the associated loss of jobs, these closures are not reflective of how Victoria Square is trading as a whole. Victoria Square continues to attract interest and investment from national and international brands due to the on-going success of our diverse retail and leisure offering,” he said.

“Up until Gourmet Burger Kitchen took the regrettable decision to close its restaurant in Victoria Square this week, our restaurant units were fully let – their situation is not reflective of the experience of our other restaurant tenants.”

“National Italian restaurant brand, Prezzo will open its first Northern Ireland restaurant in Victoria Square in March; clothing retailer, Fat Face is due to open a new standalone store in Victoria Square this spring; whilst Cruise is preparing to commence an expansion of its ground floor store in the first half of 2013.”