REPORT SAYS BELFAST PEACE WALLS SHOULD COME DOWN BY ‘2022’ 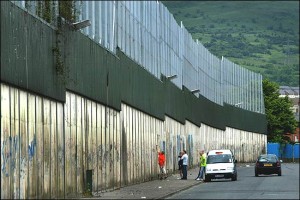 BELFAST’S peace walls should be brought down by 2022, says a draft community relations strategy report.

The Cohesion, Sharing and Integration document, seen by the BBC NI’s political editor Mark Davenport, has been in preparation for months by a cross-party Stormont group.

Last year both the Alliance party and the Ulster Unionists quit the group because of disagreements over issues like flags and parades.

The Alliance Party wanted all flags to be removed from Housing Executive estates, a move DUP leader Peter Robinson has branded as “preposterous”

A draft of the strategy from late November reveals there are 59 peace walls, gates or physical barriers across Belfast, Derry/Londonderry and Craigavon.

And nine of those have been erected since the signing of the Good Friday Agreement in 1998.

It acknowledges that addressing safety concerns with people living in segregated areas will be “critical to building confidence”.

However, it added: “We believe that together with people in the local community, we can reduce the number of physical interface structures with a view to their elimination by 2022”.

The section on teaching children to reject sectarian attitudes commits the Stormont Executive to develop “age appropriate primary and post-primary anti-sectarianism resources and ensure that teachers are trained, equipped and supported to deliver an effective anti-sectarianism module”.

A proposal aimed at young children would see the rolling out of what’s being described as a “buddy scheme” in state run nursery and primary schools near interface areas.

The report said the scheme “will involve pairing a child from one section of the community, with a child from a different community or ethnic background. As part of this initiative, nursery and primary schools from all sections of our community will pair up and provide the framework for the ‘buddy scheme'”.

The report acknowledges the potential contribution both sport and the arts can make in breaking down barriers.

It calls for short-term summer diversionary schemes already in force in interface areas to be merged with longer-term year-round programmes.

The document wants children to be taught to reject sectarian attitudes

There’s a commitment that the Arts Council should spend “£300,000 over the next three years in promoting cultural diversity, using the arts to help develop good relations”.

The Arts Council will also be asked to work with district councils on an annual Cultural Awareness Day.

The day would be intended to promote a positive attitude to people’s culture and heritage and would be marketed both at home and beyond Northern Ireland.

A section in the report deals with segregated housing. It proposes creating communities of “good neighbours” and ensuring that “there is greater choice open to those who wish to live in a mixed area”.

It suggested that the quango should get a series of extra powers related to community relations, and should in the future be known as the Equality and Good Relations Commission.

The commission’s job would include advising and challenging the Stormont Executive on community relations policy and scrutinising the delivery of district councils’ Good Relations programmes.

The future role of the existing Northern Ireland Community Relations Council is not clear.

One option is for the quango to continue funding community groups, another is for this funding role to be subject to a review.

Last week, the First Minister Peter Robinson said the strategy paper was almost ready for publication, but he acknowledged there are three areas of disagreement between the parties. He identified these as flags, parades and the past.

The November draft report seen by the BBC contains a section on flags and symbols which includes an “objective of removing all threatening and divisive symbols that are being used in a way to cause intimidation, or to glorify violence, hate or prejudice”.

It calls for proposals to be developed for “a regulatory process for dealing with the flying of flags”.

However, in an interview for the BBC’s Inside Politics last week, Mr Robinson said the DUP would not agree to a Parades Commission style body for flags, so it is clear this section is contentious.

Parts about the role of “community gatekeepers” in flying flags, which featured in an earlier draft seen by the BBC last summer, are missing from the latest report.

The November report pledges the Stormont parties to “establish an all-party working group to consider the range of options for developing a framework for dealing with the past”.

However, this commitment doesn’t appear to have won the backing of all the parties.

On parades, the November report says “some feel the Parades Commission has made a positive impact”.

However, it says the parties “remain committed to finding a new and improved framework for parades and protests”. Again this section is subject to dispute.

It is understood the Cohesion, Sharing and Integration working group has finished its work, and decisions about the final shape of the strategy, and when it might be published, will now be made by Stormont party leaders.