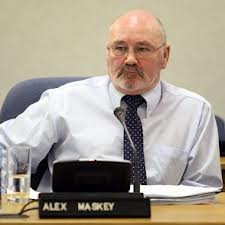 SINN Fein MLA Alex Maskey is at the centre of an investigation by the Assembly’s Commissioner for Standards over television remarks he made during recent trouble in the Short Strand.

During a debate on UTV Live Tonight last week, Mr Maskey said: “And if I lived in the Short Strand, I’d be throwing the stones along with those people – because it’s disgraceful what those people are having to put up with.”

He made the remarks during a debate with PUP councillor Dr John Kyle after trouble erupted in the Short Strand area when loyalists from outside east Belfast threw petrol bombs into the nationalist estate.

Community worker Jim Wilson had earlier confirmed to UTV that loyalists had started the trouble that evening.

The DUP made a complaint to Stanards Commissioner Douglas Bain alleging Mr Maskey breached the MLA code of conduct in his remarks about the Short Strand and violence.

Douglas Bain has told the DUP’s Peter Weir that he is satisfied that a prima facie case exists and he is starting a probe of the issue.

Mr Maskey defended the right of Short Strand residents to throw stones in defence of their homes.

Mr Weir has complained this breaches the code, which requires MLAs to uphold the rule of law and promote good community relations.

Following the remarks, the DUP has called for an investigation by Stormont’s Standards Committee into comments by Sinn Féin’s Alex Maskey, during a live debate on UTV Live Tonight, in which he claimed he would join in with stone-throwing in Belfast’s Short Strand.

The MLA’s comments were made in the context of continued violence, particularly in and around the east Belfast interface area, arising from the issue of the restriction of the flying of the Union flag at City Hall.

Loyalist and nationalist crowds clashed again on Monday night, amid reports that petrol bombs were used to attack local homes on both sides of the community.

“There is an ongoing assault against the Short Strand community …” Mr Maskey said on Monday night, during a debate which also featured the PUP’s John Kyle.

“What we’ve been hearing tonight is people from the Short Strand throwing stones back and, if they are, they’re defending their homes.

“These are not comments appropriate for any MLA, let alone one who is a former Policing Board member,” he said.

“Members of the Assembly are bound by a Code of Conduct which requires them to uphold the rule of law and promote good relations. I have asked the Commissioner to investigate if Mr Maskey’s comments are in contravention of the Code.”

Mr Weir added: “All violence is wrong and police officers in particular have borne the brunt of this, with many officers injured by the very stones Mr Maskey talked of.

“He must now immediately withdraw the comments and apologise for his outburst.”

During a Stormont debate on Tuesday morning, Ulster Unionist Party leader Mike Nesbitt said he had been “shocked” by the remarks that had been made.

“Mr Maskey is worried someone is going to get seriously injured. So am I. He calls for leadership. So do I.

“Some unionists on the lower Newtownards Road think leadership means me standing with them on the streets. I think it means offering a path that takes them off the streets, to a political place where they can have hope of delivery on the issues that concern them.”

Amid much focus on the issue in the chamber, Mr Maskey spoke out strongly against the violence that had been seen on the streets.

“I want to make it very clear, I do not want to see one stone thrown …” he said.

“But you cannot fault a family who has no other option than to defend their home.”

Mr Maskey also warned Northern Ireland is being dragged into a dangerous cycle of violence that is putting lives at risk.

The DUP’s Paul Givan challenged Mr Maskey over the nature of his comments.

“What we need is unequivocation – violence is wrong, from wherever it comes, under whatever circumstances that it comes,” he said.

In a statement, issued in the wake of UTV Live Tonight being aired, UUP MLA Tom Elliott had branded Mr Maskey’s comments “outrageous and totally irresponsible”.

“I do understand the frustration, not only of him, but the people living in interface areas – and indeed the unionist people of the community who are not out protesting or engaging in violence.”

However, Mr Elliott insisted that the remarks about stone-throwing did go too far and that they should be withdrawn.

“I think once you go a step further and say that you would be prepared to engage in throwing stones across the interface, I don’t think that’s helpful – especially at a time like this,” he said.

“Tensions are extremely high and we need to do what we can to calm those situations down.”

Mr Elliott did not accept that there was any comparison with heated comments he has himself made previously, including those about the GAA in his Fermanagh/South Tyrone constituency.

He said that Mr Maskey should simply retract the comments and continue to engage with the local community, and with the police and elected representatives, to try to find a solution.

During the UTV Live Tonight debate, Mr Maskey had earlier insisted that he wanted to see total calm brought to the streets.

“I don’t want to see any person attacked – any police officer having a petrol bomb fired at them and certainly no homeowner or their family with a petrol bomb thrown at them, or anybody throwing stones in the area,” he said.

Alliance Party chief whip Stewart Dickson said that Mr Maskey should not have said that he would get involved in stone throwing if he lived in the Short Strand.

“In saying these words, he is providing legitimacy to those who have been carrying out the violence we have seen in recent weeks,” he said.

“All sides need to tone down the language that they use in order to reduce the tension.

“We have all seen that there has been violence coming from both sides. So the last thing the police need is a politician providing some sort of justification to this trouble.

“What he should have said is that, if he lived in Short Strand, he would have done everything he could to stop people throwing stones.”