IRISH CUP FIFTH ROUND REPLAY: LINFIELD GET THE BLUES AS CRUSADERS WIN 2-1 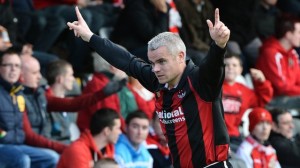 IT really said it all about Linfields’s 2012/2013 season after they crashed out on Tuesday night in the Irish Cup to Crusaders.

“That was as poor of a performance as there has been all season in the 2nd half.

“Hard to tell whose season depended on that result more,” said the message on the official Linfield Twitter account.

Beaten in a penalty shoot out with Ballymena Utd to lose the Co Antrim Shield Final.

Too add to their woes, Crusaders beat them again in the Irish Cup Fifth Round Replay on Tuesday night.

The league must now be their priority but they are third place behind Crusaders and runaway leaders Cliftonville.

At Seaview, it was former Lnfield striker Timmy Adamson scored the winner against his old club as Crusaders won Tuesday’s Irish Cup fifth round replay 2-1 at Seaview.

Adamson pounced in the 69th minute to put the Crues through to the last 16 where they will be at home to Glenavon.

Linfield had taken the lead on 27 minutes through a Brian McCaul strike.

Just before that Linfield felt they should have had a penalty when Michael Carvill went down as debutant keeper Craig Hyland came out.

However, referee Colin Burns ruled it was not a penalty and booked Carvill for diving.

In the second half, with the tie at 1-1, Crues defender Craig McClean saw his 35-yard shot strike the visitors’ crossbar.

Adamson’s winner – his 15th goal of the season – came when the ball broke to him after Paul Heatley’s mishit effort had deflected off a Linfield defender.

One bit of bad news for Crusaders came when striker Gary McCutcheon pulled up with a hamstring injury and he is likely to miss Saturday’s League Cup final against Cliftonville.

It is the first time in 16 years that Linfield, double winners in six of the last seven seasons, have lost their opening match in the Irish Cup.

“On the balance of play, I think we deserved to win,” said Crusaders manager Stephen Baxter.

“We created chances to put the game to bed and did not take them.

“It was never going to be pretty. It was a battle and both sides had plenty of warriors.

“They scored a beautiful goal – a real bullet of a shot.

“But we did not panic and restricted them quite well after that.”