PRAISE FOR TRADE UNIONIST INEZ MCCORMACK WHO HAS DIED 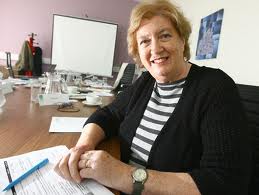 TRIBUTES have been paid to veteran Belfast trade unionist and campaigner Inez McCormack who died on Monday.

Ms McCormack began her trade union career in the late 1960s before rising to become president of the Irish Congress of Trade Unions.

She was born in Belfast in 1946 into a working class family and spent most of her adult life fighting for the rights of those around her.

She left school at 16 and later studied social work at Trinity College Dublin and Queens in Belfast.

In the late 1960s she was prominent when the civil rights movement spilled onto the streets.

For decades she campaigned tirelessly for the rights of workers – especially for the low paid – first with the union NUPE and then UNISON.

In 1998 she paid an important behind-the-scenes role in the 1998 Good Friday Peace Agreement which spawned the current political settlement at Stormont.

But it was he long fight for equality and human rights – especially for women – for which she will be most closely remembered.

A founding member of the Equal Opportunities, Fair Employment and Human Rights Commission, she broke the glass ceiling herself becoming the first female president of the Irish Congress of Trade Unions.

During Bill Clinton’s first visit to Ireland as US president, the First Lady Hilary Clinton paid tribute to her work – the beginning of what became an enduring friendship.

It was a fitting tribute that her life term work was immortalised when the Holywood legend Meryl Streep played her in a Broadway play. 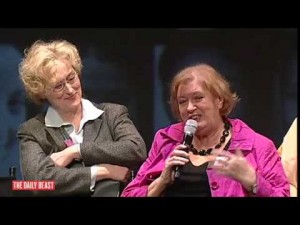 At the time Ms McCormack said: “It is very humbling to have your life story represented in this way and a privilege to have an Oscar-winning actress and strong female character like Meryl Streep involved in the dramatisation.

“I have had the privilege of spending a lifetime at the service of warm strong women, who challenged injustice not just for themselves but for the people and communities they cared for and whose only affirmation has been that of their own conscience.”

“Inez McCormack was impressive and effective in all she did. She stood for workers’ rights, for women’s rights, for equality and public services,” he said.

“She was articulate, compassionate and steadfast. She was immensely charming as well as being intense in her convictions.

“Her contribution to public life went beyond her primary role as a worker’s defender as she helped to benchmark the values, principles and protections that were needed for a fair and stable society.”

Patricia McKeown, the regional secretary of UNISON added: “Inez will never leave us in spirit. She has touched the lives of thousands of ordinary women and men and she has succeeded in what she set out to do. She has made a difference.

“Inez constantly battled on shifting sands on some of the most controversial issues such as discrimination, child sexual abuse, rape in marriage and as a weapon of war and a woman’s right to choose.

“Her vindication lies in the fact that many of the issues on which she broke the mould are now seen as safe ground for those who came later.”