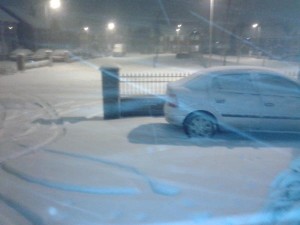 THE Met Office has was warned that wintry weather conditions may affect travel plans on Sunday as a yellow weather warning remains in place for Northern Ireland.

Snow in the east and icy conditions across the region are likely as a yellow weather warning is still in place.

Motorists are advised to exercise caution when travelling, particularly on untreated roads.

A Roads Service spokesman said: “Salting operations were undertaken last night and further salting of roads on the scheduled network considered to be at risk is underway this morning”

Belfast International airport remains open and operational, however a spokesperson said adverse weather in other parts of the UK could affect some flights.

“Passengers who are due to travel should contact their airline for the latest information on their flights,” they said.

Flights are running at George Best Belfast City Airport and passengers are advised to check in as normal.

Thousands of passengers have been left stranded at London Heathrow airport after flights have been cancelled- more than twice the number of flights may be affected on Sunday. 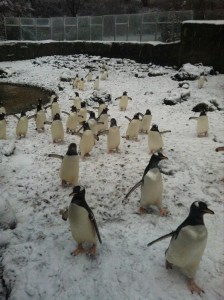 It will be mainly dry on Sunday for most west and northern areas, with some wintry showers forecast across Co Down and south and east Antrim which will become more frequent later in the afternoon.

Later showers will turn to longer spells of sleet and snow spreading westwards as temperatures fall below zero.

The cold conditions are set to continue into Monday which will see outbreaks sleet and snow over Belfast and Co Antrim and north into the Sperrins.

Large parts of the UK will experience further snowfall on Sunday with up to ten centimetres predicted to fall in some areas and 15 centimetres in higher ground.

Around 3,000 homes were affected by power outages as heavy snow hit NI on Friday.

If you have a picture of snow in your area you can upload it here to have it featured on our Snow Watch gallery.