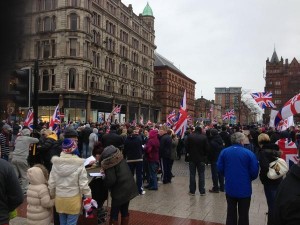 HUNDREDS of people have gathered at Belfast City Hall for a peaceful Union flag protest.

Police are also out in numbers in and around the City Hall.

It has now become a regular Saturday gathering for loyalists furious over the Belfast City Council decision taken on December 3 to only fly the Union flag on designated days.

Following the rally, protestors will walk back to east Belfast via Middlepath Street, just skirting the fringee of the nationalist Short Strand.

Political, religious, community and paramilitary leaders earlier this week called for an end to the violence which marred last week’s Union flag protest.

The peace call and leaflet campaign was also supported by the UVF, UDA and Red Hand Commando. 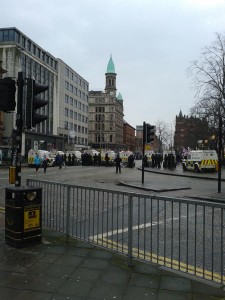 The trouble flared after nationalists first attacked loyalists which erupted into hand and hand fighting.