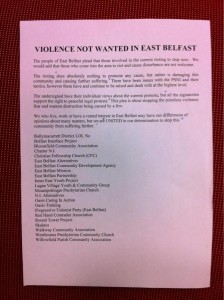 The peace leaflet being distributed in east Belfast

LOYALIST paramilitaries in east Belfast are backing a leaflet appeal for an end to the street violence.

The leaflet campaign is calling for no more disorder is being launched on Thursday afternoon.

And community and church leaders involved in the campaign have made a direct appeal for an end to the scenes of unrest at a press conference.

It follows street violence which erupted in the Short strand area on Saturday following a demonstration outside Belfast City Hall.

“The rioting does absolutely nothing to promote any cause, but is damaging this community,” the statement said.

“We would add that those who come into the area to riot and cause disturbance are not welcome.

“There have been issues with the PSNI and their tactics, however, these have and continue to be raised and dealt with at the highest level.”

The statement said that those who had signed it, had their “individual views about the current protests, but all the signatories support the right to peaceful legal protests”.

“This plea is about stopping the pointless violence; fear and wanton destruction being caused by a few.

“We who live, work, or who have a vested interest in east Belfast may have our differences of opinions about many matters, but we are united in our determination to stop this community from suffering further.”

Gary Mason from East Belfast Mission, where the meeting was held on Thursday afternoon, said the decision had been a “community effort from a number of people across the board”.

“The primary plea today is that we’re asking that the violence within east Belfast comes to an end,” he said.

In relation to the protests, Mr Mason said: “People within a democracy have a right to protest, and at the moment there are no conversations ongoing in relation to that.

“I’m sure there will be other conversations in the future about protests, politics, about democracy and all of those things undoubtedly need to happen.”

Although the leaflet doesn’t name loyalist paramilitary organisations, it is believed the UVF, UDA and Red Hand Commando leaders in east Belfast are backing the peace campaign.

Since December 3, when Belfast City Council voted by 29-21 to only fly the Union flag on designated dates, protestors have blocked roads causing large scale traffic disruption.

It is understood the Chief Constable will hold talks with representatives from east Belfast on Thursday to discuss the ongoing protests and recent violence.