GRITTERS AT THE READY AS HEAVY SNOWFALL FORECAST FOR NORTHERN IRELAND 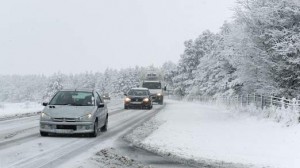 DRIVERS across Northern Ireland have been warned by the Met Office to expect snow on Friday as gritter lorries prepared for a busy night.

The Met Office issued an amber alert, the second highest alert, advising that people should be prepared for potential disruption caused by snowfall for the weekend as well.

It is expect that up to 25 cm of snow will fall over high ground and mountains.

But in low lying areas there is also expected to several centres of covering as motorists and pupils set off on Friday morning.

Transport Minister Danny Kennedy said that gritters were on standby to deal with bad weather.

He said that since October, more than 300 staff and over 130 gritters have been salting main roads during the cold spells.

“We are now half-way through the winter period and would expect further icy conditions and snow before the end of March.

“During spells of prolonged snow, all gritters will be fitted with snow ploughs and efforts directed to clearing snow from motorways and the trunk roads, before moving to other main roads and the busiest urban link roads.”

He added that the operation will continue until all roads were cleared, but warned “this may take some time, even with all resources deployed”.

In very deep snow, Roads Service will use its nine snow blowers, the latest of which can shift 1,600 tonnes of snow an hour.

Mr Kennedy said: “I would urge motorists to take care on the roads.

” The best advice is in the Highway Code – drive with care even if roads have been salted, be prepared for road conditions changing over short distances and take care when overtaking gritters.

“I would again remind the public to make sure their homes including outside pipes are well insulated and that we all keep an eye on our vulnerable and elderly neighbours.”