£2 MILLION IN BOOKINGS TAKEN FOR WORLD POLICE AND FIRE GAMES 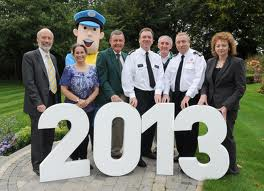 Launh of NI team for World Police and Fire Games

RESERVATIONS worth more than £2million have been booked with local accommodation providers for the 2013 World Police and Fire Games.

Sports Minister Carál Ní Chuilín and Tourism Minister Arlene Foster made the announcement at a breakfast for accommodation providers in Belfast City Hall.

The event brought together practitioners from across the tourism sector with a view to maximising the accommodation provision during the games.

Registration is under way for the sporting spectacular which takes place in Belfast in August, and competitors from across the globe are making plans to visit in the summer.

DCAL Minister Carál Ní Chuilín said: “As 2013 is now upon us, we are only months away from the biggest sporting event ever held in the north.

“With 25,000 people – 10,000 participants and an additional 15,000 friends and family – expected for the World Police and Fire Games it promises to bring sporting, social and economic benefits.

“Today is about further raising awareness. With £2m of accommodation bookings so far, those in the hospitality industry are starting to see the scale of this event.

“But this is only the beginning and, as the countdown to the Games continues, this figure will continue to increase.

“We have talked about embracing the opportunities offered by the Games. It is vital that key stakeholders, such as accommodation providers, are part of that discussion. I am keen for local businesses and communities to make the most of the Games. This event is about building the partnerships which will help to make that happen.

“With the World Police and Fire Games, not to mention the City of Culture celebrations in Derry, 2013 promises to be fantastic year for the north.”

Competitors from over 40 countries have registered for the Games, which will see members of the uniformed services compete in 57 sportsat 42 different venues.

DETI Minister Arlene Foster said: “While £2m is a significant milestone – and it underlines the economic importance of the WPFG – there is still a long way to go as we seek to maximise the economic benefits of the Games.

“In the past few years Northern Ireland has shown it can host world-class events and once again we are extending a global invitation to visitors. While people will be coming here for the Games, they will stay to experience our tourist offering.

“2013 promises to be another significant year of opportunity for Northern Ireland. The tourism industry is well prepared and it is important that we continue dialogue with stakeholders to take full advantage of the economic potential that exists.”

The Lord Mayor of Belfast Alderman Gavin Robinson said: “We are very proud to be the host city of the 2013 World Police and Fire Games and this announcement is excellent news for Belfast.

“The World Police and Fire Games will enable us to showcase the city to an international audience and deliver economic benefit to our city’s businesses. The WPFG organising committee estimates that the event will bring in up to £21.4m to the local economy – so this prestigious event is not only a winning one for the competitors involved in the games and our accommodation providers but local business as a whole.

“Belfast City Council has been involved from the start of the initial bid process back in 2007 and is taking the lead in managing the Opening and Closing Ceremonies as well as the Athletes Village. We’ll ensure that the athletes and their guests are treated to a fantastic showcase of Belfast talent.”

Among those present were representatives from the hotel and campus sectors, including key contacts from the industry bodies such as NITB, the Hotel Federation, B&B Partnership Committee, NISCHA, Regional Tourism Partnerships and Belfast Visitor & Convention Bureau, the official accommodation booking agent for the Games.

They were joined by five international athletes who will participate in the games, including Jose Antonio Gomez, a Spanish fire fighter taking part in the Toughest Competitor Alive, and Toronto Policeman Mike Cannon who will compete for the sea angling prize.