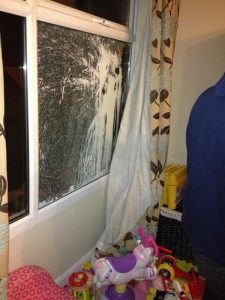 A MAN has been arrested in Bangor over an attack on the home of two Alliance Party councillors in the town.

A window was smashed and paint was thrown at Michael and Christine Bower’s home in the Carnalea area on Wednesday, December 5.

The 40-year-old man is being questioned about criminal damage.

The attack was one of a series on Alliance Party property linked to protests over Belfast City Council’s union flag decision.

The party was targeted after Belfast City Council voted to fly the union flag at city hall only on designated days.

Alliance holds the balance of power on the council, and could have voted down the original motion to remove the flag on all days.

It came up with a compromise motion suggesting that the flag should be flown only on designated days.