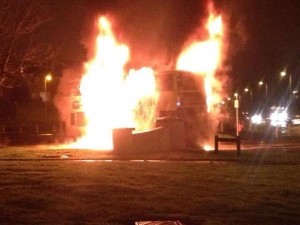 POLICE were back on the streets of east Belfast on Monday after further trouble erupted on the lower Newtownards Road.

Petrol bombs were hurled into Strand Walk in the Short Strand and special needs children had to flee from St Matthews Church.

Local loyalist community worker Jim Wilson said the trouble was started by people from his own community.

“They weren’t doing this in my name or in the name of the community I represent,” said Mr Wilson.

Nationalist youths responded by firing stones over the peaceline into the loyalist Newtownards Road.

Sinn Fein MLA Alex Maskey told UTV Live: “If I was living in the Short Strand and I was coming under attack from petrol bombs I would be throwing stones back too.”

Former interim PUP leader Dr John Kyle said there was a “small rump” who were continuing to protest on the streets.

“The PUP has called for a meeting with the Ulster Protest Voice,” said the PUP councillor.

The UPV, formerly led by ex-RAF sergeant Jonny Harvey, has been organising street protests. He quit the UPV last week to join the PUP.

On Monday night, a PSNI spokeswoman says police are currently dealing with disorder on the Newtownards Road.

It is understood the petrol bombs were thrown in Bryson Street.

There is a heavy police presence in the area.

Translink says all Metro services have been withdrawn in east Belfast “due to two separate incidents”.

It is understood one incident involved the attempted hijacking of a double-decker bus, with reports a driver was injured after a brick was thrown through a window.

He said: “This evening homes on Strand Walk came under petrol bomb attack from a unionist crowd on the Newtownards Road. A special needs group were forced to flee from St Matthews Parochial Hall.

“This was a blatant, well planned and organised sectarian attack on this community from those gathered on the Newtownards Road.

“It has nothing at all to do with flags or identity. It is an attempt by unionists to intimidate a small catholic community.”

There have also been a number of reports that homes in Pitt Park and Susan Street on the unionist side of the interface have come under attack.

He said: “I swerved around a group of around 20 young lads at the bottom of the Newtownards Road and they were attacking homes with bricks and bottles.

The disturbances are linked to the ongoing dispute over the flying of the Union flag at City Hall.

He also warned rioters involved in the ongoing trouble that they will get caught.

“For those who remain committed to rioting and violence, I would say this – don’t make it worse because the knock on the door is coming,” he said on Monday.

Around 100 police officers have been hurt since the start of the flag dispute last month, while over 110 people have been arrested.

It comes after Belfast councillors voted at the start of December to restrict the flying of the Union flag over City Hall to 18 designated days.

The Newtownards Road is currently closed between Templemore Avenue and Bridge End.

Motorists and members of the public are being advised to avoid the area.