CHIEF Constable Matt Baggott has warned people involved in rioting they can expect “a knock on the door” from his officers investigating street violence.

And he said those who were organising riots are leading young people “by the nose towards prison”.

The Chief Constable Matt Baggott was speaking at a press conference on Monday following rioting on Friday and Saturday.

Mr Baggott defended a police operation on Saturday when a “breakaway crowd” of loyalist protesters marched past a nationalist area in east Belfast.

However, loyalists maintain that marchers were attacked first by nationalist youths from the Short Strand before hand to hand fighting broke out between the two sides.

Some descended into rioting, with police attacked in Rathcoole in Newtownabbey, Carrickfergus in County Antrim and in east Belfast.

In total, 29 police officers were injured at the weekend in rioting at east Belfast’s Short Strand interface.

Four were admitted to hospital. On Monday, one officer is still receiving hospital treatment.

It followed a loyalist protest over the decision to restrict the flying of the union flag at Belfast City Hall.

Mr Baggott said that “sweeping protesters” off the streets would not work.

“Even when the PSNI was 12,000 strong it would have not have been possible to take such a rigid approach towards protests. Our approach has always been to be measured and responsible – we have simply to put public safety first.” he said.

He said that the parades were not being properly regulated.

“I want to see an absolute reassertion of the rule of law in relation to the Parades Commision’s position,” he said.

“You can’t have public safety and unregulated parades – they don’t go together.

“I want to see a total assertion again that the only way to allow peaceful protest must be through proper notification, proper planning and proper regulation and that needs to a universal voice across politics and from those who are community activists.” 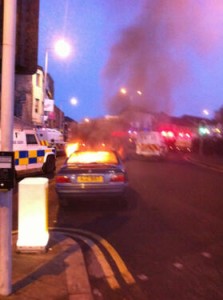 Mr Baggott said his overwhelming sentiment and those of the vast majority of people is sadness.

“Sadness that we’ve seen another weekend of disorder, another weekend where inevitably as the weeks unfold, young people predominantly being brought before the courts with their lives being blighted by criminal convictions,” he said.

“If the protests are to continue a good step would be to move them back from interface areas,” Mr O’Donnell said.

“That would immediately start to bring a calm to the situation.

“It would give an opportunity for people to begin to engage, to try and talk to each other, to try and rebuild, to ease the tensions and to try and pick up the pieces.”

Senior leaders of a loyalist paramilitary group have said violent opposition to the union flag decision must stop.

Jimmy Birch, from the organisation in east Belfast, was speaking in an interview for a BBC Radio Ulster documentary, Inside The Flag Protests.

“Every time they call a tune, we take to the streets,” he said.

Mr Birch said UDA members had been told not to take part in rioting.

Meanwhile, at least 1,000 people gathered outside Belfast City Hall at lunchtime on Sunday to protest against the violence.

There were no speeches, but for five minutes they clapped, cheered, whistled, and banged drums in what they called an “anti-silence”.

People said they were representing “the silent majority” who were opposed to violence and trouble.

Trouble started after Belfast City Council voted on December 3 last year by 29-21 to only fly the Union flag on designated days of the year.

The first was last Wednesday for the Duchess of Cambridge, Kate Middleton’s 31st birthday.

It will next be flown on January 20 for the Duchess of Wessex’s birthday.

The majority of the street demonstrations have passed without incident.

However, some have resulted in serious rioting in which 99 police officers have been injured.

To date 112 people have been arrested, of whom 85 have been charged.

Police expect to make more arrests in the days and weeks ahead.