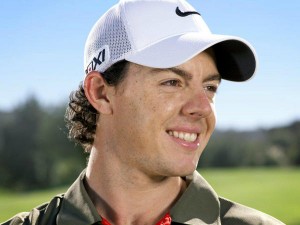 And the 23-year-old has already shot his advert for the sporting giant firm.

The deal with Nike makes the Holywood golfer their biggest star.

Here he is picture wearing a baseball cap emblazone with the Nike symbol.

However his uncle Colm has told the Press Association: “The money will not change Rory.

“He wil stay the same – up for the craic and a bit of banter.”

It is the cherry on the cake for McIlroy after being crowned No 1 golfer in the world – both on an off the golf course.

In the new advert, filmed last month, McIlroy appears with his arch rival on the world golfing tour Tiger Woods who helped recruit the Ulsterman onto Nike’s books.

According to sources in the US, the two “banter” while hitting the company’s new red driver and marvel at how far they’re hitting the ball.

The commercial also features two other long-hitting golfers, Nick Watney and Kyle Stanley, who have also made the switch to Nike as the company beefs up what has been a disappointing roster.

McIlroy, who had used Titleist clubs and balls in his five years as a professional, has signed a 10-year deal with the Oregon-based sports giant.

The deal makes him Nike’s highest-paid golfer, replacing Woods who fell from grace in 2009 over his extra marital affairs.

It means the Northern Irish golfer will endorse a range of Nike golfing equipment including clubs, clothing and footwear.