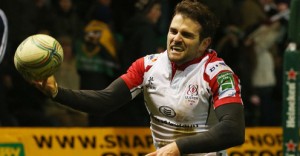 ULSTER became the first side to qualify for this season’s Heineken Cup quarter-finals with a 23-6 home win over Glasgow.

Played under appalling conditions at Ravenhill, it was far from a vintage display from the RaboDirect PRO12 leaders.

However, Mark Anscombe’s men had enough in the tank to put Glasgow away after losing a grip of the game temporarily in the second half.

Ulster started the game like a side looking to make amends for their shock home defeat to Northampton last time out.

And the home side quickly went ahead thanks to Ruan Pienaar.

After dominating the opening quarter, they crossed for a try on 19 minutes after a five-metre lineout, Nick Williams powering his way over from close range with Pienaar tagging on the extras.

Pienaar missed his next penalty chance but Glasgow could not take advantage as Duncan Weir was first short and then wide with two penalty tries.

Glasgow’s forwards suddenly seized control after the break and they took the game to Ulster, enjoying particular success with the driving maul.

They got their reward as Weir kicked two penalties and Iain Henderson was sin-binned.

A raft of substitutions on the hour swung the game back Ulster’s way and Pienaar’s penalty settled the nerves.

But he missed his next chance and the game was only finally put to bed seven minutes from time, when Weir sent a drop-out out on the full and moments later Paul Marshall’s pass gave Jared Payne the chance to dummy his way over from close range.

Five minutes later Darren Cave burst down the left wing after a quick turnover and slid in to score.

Ulster could not force a fourth try, they will be able to secure a home quarter-final with victory at Castres next week.

If they beat Castres, they will have a home tie in the Heineken Cup quarter finals.