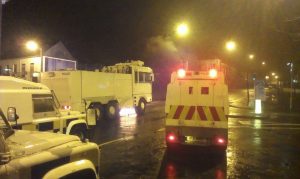 Police and water cannon in Carrick on Friday night

FOUR PSNI officers have been injured as police collegues came under attack with petrol bombs after a number of Union flag protests on Friday evening.

It is reported that a 300-strong peaceful protest in Carrickfergus has turned ugly with running battles between some protestors and police in West Street.

Police have large numbers in the area along with two water cannon.

“Their response is way over the top. Talk about heavy handed tactics,” said a loyalist.

However, this is disputed by police who say officers are dealing with a “serious public order” situation and have asked motorists to avoid the area.

The loyalist source added: “These are co-ordinated attacks to spread the PSNI resources as thinly as possible across as many areas as possible.”

The O’Neills Road roundabout at Cloughfern, Newtownabbey has been closed due an outbreak of rioting following a protest. One police officer has been injured during the trouble at Cloughfern. 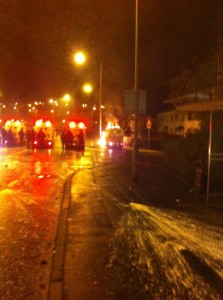 A bus has reportedly been hijacked and set on fire in the area.

The PSNI has now deployed water cannon into the area to disperse rioters.

The other roads include: Following roads have now re-opened-Ormeau Rd at library; Newtownards Rd at McDonald’s Templemore Ave /Knock Road at junction with Glen Rd.

* the Ormeau Road at the public library (now re-opened);

*the Knock Road at junction with Glen Road (now re-opened). 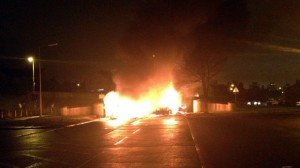 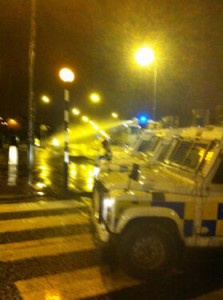 Police and water cannon in Newtownabbey

Earlier, it was a battle for the hearts and minds of the public on Friday evening.